Pregnancy is a nervous time for any animal or pet parent. If you are a cat owner and this is the first time that your cat has become pregnant, you may not know what to expect. You may have seen friends’ litter with as many as eight gorgeous healthy kittens but been told that your young cat will only have a couple.

How many kittens can a cat have? Your cat will have a small number to begin with – around 2-3 – and then more in later life, usually around 4-6 kittens. You can get a better idea of numbers via examinations and x-rays, but don’t be concerned if there are just 1-2 kittens on the first pregnancy, this number will increase once the cat matures.

You may even have heard that this first litter isn’t going to survive. So, what is the truth behind all of this? How many kittens will your cat have? Also, how many are normal in the first litter, and what are the chances of survival?

How Many Kittens Can A Cat Have?

Cat litters can come in various sizes and it isn’t uncommon for a mature mother to produce around 4-6 kittens in one go. Meanwhile, her daughter in her first year of breeding may produce 2-3. The number can increase with maturity. But, there may also be times when there are fewer due to ill-health or other issues. It is possible to get a good indication of a litter size before birth. However, you also need to be prepared for the fact that not all kittens will survive. This isn’t a guarantee, but you can’t feel bad if a runt doesn’t make it.

What Determines How Many Kittens Are There In A Litter?

The number of kittens that develop will depend on the age and health of the cat. You may also find that their breed type could be a factor As they mature they will typically produce a lot more. However, some health conditions could have an impact on fertility, causing them to birth far fewer than normal.

How Many Kittens Are In A Cat’s First Litter?

The first litter is usually a lot smaller and the number of kittens increases with age. One to three is about average for a first litter. This can increase to around 4-6. But, it could be even higher as the cat matures.

Is A Litter Of 2 Kittens Normal?

You might be disappointed to find that the first labor is short and there are only two cats. But, this is perfectly normal for a first litter. If your cat continues to breed as they mature, but still only produces 2 or 3, you might want to talk to a vet.

How Can You Tell How Many Kittens A Cat Is Having?

First of all, the number of nipples on a cat does not determine the number of kittens that will be born. There could be more than enough to go around or not enough for a larger litter. Instead, you need to rely on physical examinations. A vet can press on the stomach area to feel the embryos, but an x-ray gives a much more accurate picture as you can see all the skeletal forms.

How Many Kittens Usually Survive In A Litter?

Survival rates in litters can vary depending on the circumstances. Stray cats in dangerous conditions may not do as well as those in comfortable homes. Still, there is a risk that there will be weaker kittens in the litter that don’t stand much of a chance. Without intervention, they could easily die. There are also cases of still-born kittens. On average, 70-85% of a litter will survive. So, if you have a pregnant cat at home, don’t assume that every kitten will reach maturity. 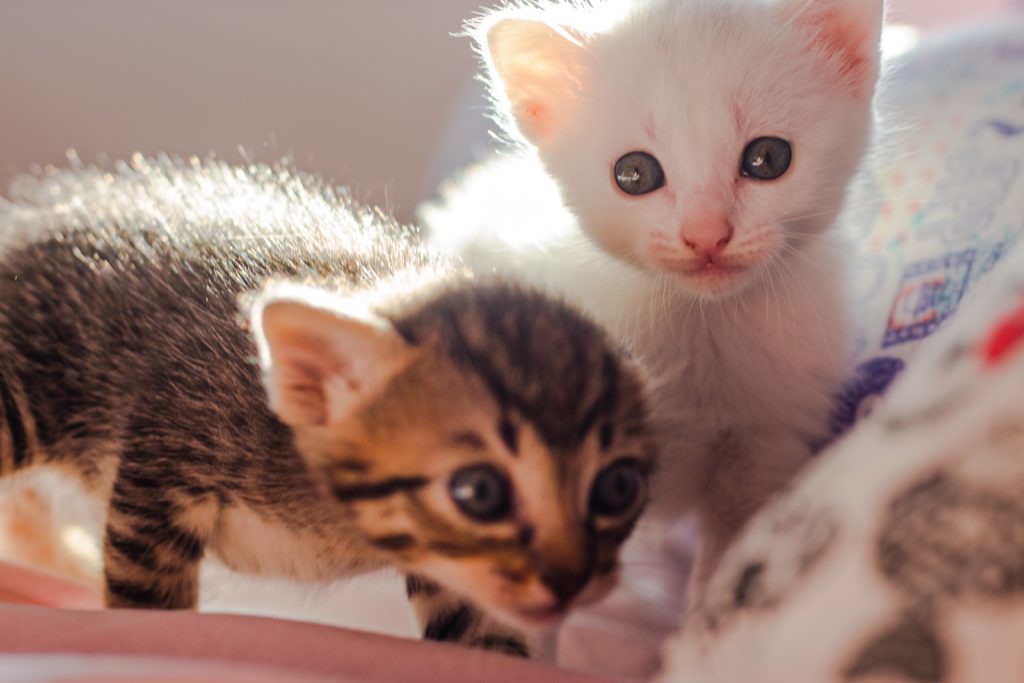 There is a greater risk that some of the first litter of cats will die because of the inexperience of the mother. Some first-time mothers lack the experience and instincts to handle their newborns. They should deal with the amniotic sac, chew through the cord, clean the kittens and get them all safe and ready to feed. But, there is the risk that they will do nothing without guidance.

Related Post: How Many Litters Of Kittens Can A Cat Have In A Year?(Safely)

Will A Mother Cat Kill Her Kittens If You Touch Them?

This understanding comes from the idea that if you handle a wild animal it will smell like you and the mother will abandon it. Domestic cats won’t kill their kittens if you touch them, which is a relief if you need to check on them or provide additional support. Still, the mother may not like you going near them and may move them to a new nest out of reach. This doesn’t mean that mothers won’t sometimes kill kittens if they believe that the litter isn’t viable or if there is a threat to their lives.

Are Animals From The Same Litter Twins?

Yes, they can be twins, triplets, quads, etc., much like humans. Most of the time, you will find that they are fraternal twins. This means that individual eggs were fertilized with individual sperm and developed separately. However, there are times when a single fertilized egg will split to create two embryos with matching DNA. So, there could be identical twins in the litter.

Can Cats From The Same Litter Be Different Breeds?

Yes, but not in the way that you might expect. You might see a litter of cats with different colored fur, or different eye colors, and assume that they were all fathered by different cats. This isn’t necessarily true as a recessive gene can come through in one kitten and not the other. However, if a cat ovulates with more than one egg released in a heat cycle, and then mate with more than one male, each egg could be fertilized with the sperm of each prospective father.

In short, you should find that your cat will have a small number to begin with – around 2-3 – and then more in later life. Also, don’t get scared by stories of whole litters dying. There is a kitten mortality rate and it is worse in the first litter, but they could beat the odds if the mother’s instincts kick in.