There are always going to be some cats that are more touchy-feely than others. For every loner cat that doesn’t like pets, there is one rubbing up on you and sleeping in your lap. But what about the cats licking hair? What is going on there?

Why does my cat lick my hair? Cats lick our hair through feelings of affection and basic feline social norms. When cats show affection to each other and enforce their bonds as a family, they touch each other with their tongues rather than their paws. Alternatively, they might get territorial and want to put their scent on you. It isn’t uncommon for cats to do the same to us, especially after showers, and there isn’t much wrong with this. But, there are concerns when cats start to bite or chew hair instead. That is when you need to start setting boundaries.

Is it OK for my cat to lick my hair?

There isn’t much wrong with cats licking owners’ hair from a medical point of view. They will spend a lot of time licking their own fur, and that of other cats, so adding your own hair to the mix isn’t a big deal. They are going to get hairballs anyway. However, you might have to consider the products that you use in your hair. We don’t always consider how many chemicals we add to our hair through dyes, styling products, and hairspray. Too much exposure to this isn’t a good idea.

Why does my cat lick my hair after a shower?

It isn’t uncommon for cats to come and lick your hair after a shower. This is often when your hair is at its most attractive to them, especially if you use a shampoo that has a scent that they really like. Here they might not be showing affection as much as getting some instant sensory gratification. Or, you might find that your cat is being a little territorial. Licking also shows that their chosen recipient is theirs and this close attention and grooming can add some of the cat’s scent. You are going to be all fresh and clean after a shower and in need of some immediate attention.

Why does my cat bite and lick my hair?

The problem is that this attraction to the scent of your hair may also lead to a desire to taste it. From there, cats might even start to bite at the hair to get hold of it and get the most from that taste. Then there are those cats that use biting and grabbing at the hair with their mouths as a form of grooming. They see this as an even more effective strategy for dealing with any possible parasite and for displaying their affection. It can also help cats distinguish a pecking order. One cat that “aggressively” grooms another may simply showcase their love and get more in return.

Of course, this doesn’t really translate in the world of humans and we might just end up getting annoyed with our cats for tearing out hair, messing up a hairstyle, or even causing some pain. The cat doesn’t mean anything bad by it, they are just overenthusiastically showing their love for you.

Why does my cat want to eat my hair?

It is important to differentiate between chewing and eating. Chewing on hair when grooming is pretty normal and the cat isn’t actively trying to consume the hair. If, however, you notice your cat biting off the hair and then eating it, you need to put a stop to it as soon as possible and get veterinary help. Long, unbroken hairs swallowed by cats could become obstructive and a choking hazard.

How can I stop this behavior?

You need to have strong boundaries in place with your cat to curb any unwanted behavior when licking gets out of hand. This is even more important for cats that decide to start biting at your hair. You don’t want to put them in danger or damage your hair for the sake of their affection. If they start biting or licking too much, make a point of putting the cat down out of reach and turning away from them. Create that physical distance to show that excessive licking isn’t a good way to get your love and attention. Cats that crave intimacy like this may soon get the message. Instead, reward them for the time that they rub against you instead. Show them that touch is fine but licking isn’t.

You may also choose to mask your hair with a smell that your cat doesn’t like. This is particularly effective for any cat that prefers to lick your hair after a shower. If that intoxicating taste and scent aren’t there anymore, they may lose interest.

What if I lick my cat?

Finally, we need to address this point. This might sound like a strange question to some cat owners that wouldn’t have even considered licking their cat back in return. But, there will be people that decide to do it back for a laugh, or because they believe that their cat will get something positive from the experience. For example, there may be the misconception that cats expect this sort of affection and would prefer it to stroking.

Simply put, they won’t prefer this at all. In fact, some cats could get really confused and comfortable with this sudden shift in the dynamic of the relationship. After all, many lick owners as a sign of their affection and place in the hierarchy of the family. Getting licked back may send mixed messages. Also, they might not appreciate the way that you lick, the feel of your tongue, or the smell of your saliva.

Also, do you know where your cat has been? Cats might enjoy liking our nice, freshly-washed hair, but they may have just been out in the dirt or rolling in kitty litter.

In short, this behavior isn’t as weird as you might think at first. It can be alarming when it happens for the first time, but it is just your cat’s way of expressing their love. This is fine in small amounts, but you should discourage the behavior if it gets excessive. Also, while hair eating by cats is uncommon, make sure that they don’t swallow your hair 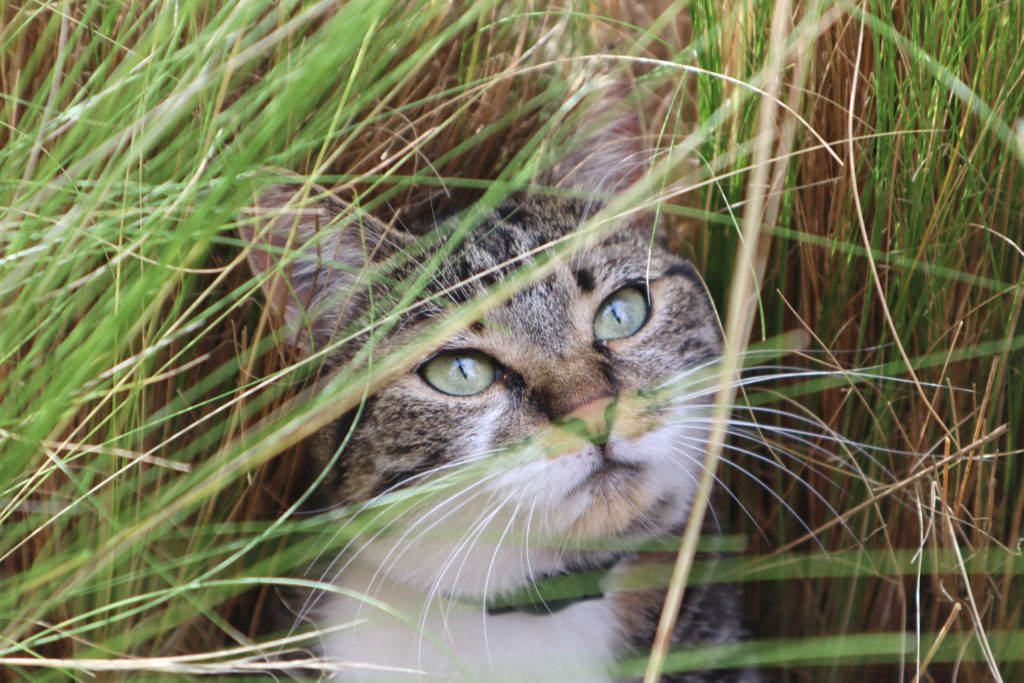