What do our cats get up to while we are asleep at night? If you have an outdoor cat, they could get up to all kinds of adventures and mischief. This includes killing and eating things that perhaps you would rather they didn’t. But what about mice?

Do cats eat mice? In short, the answer is that cats will eat mice in some situations. It isn’t that common as long as the cat is well-fed and has no interest in the mouse beyond playing with it. If you are concerned about your cat eating mice, or simply fed up with them being brought it, you can discourage this behavior.

Are cats just catching mice as part of a game or are they eating them too? Also, if they are eating them, is it safe for them to do so?

1.Do Cats Actually Eat Mice or Just Kill Them?

There will be some cat owners with no experience of their cats eating mice at all. Instead, they will just find the dead bodies by the bed in the morning. This would suggest that the cat has no interest in the mouse as food, that it was merely a toy and now a gift for you. But, some owners find half-eaten remains and you also don’t know if they ate another mouse before killing this one.

Most cats won’t eat mice unless they are hungry. Instead, the mouse is more of a toy in their games. In many cases, the cats won’t even kill the mice they find, preferring to toy with them for as long as possible. A dead mouse may have died by accident or because the cat was bored of the game and ended it. But, there is the chance that your cat will eat their prize.

2.Is it Safe for Cats to Eat Mice?

If your cat was to eat a mouse, there is a potential risk of harm or ill health. The truth is that you don’t know where that mouse has been, what they have been in contact with, and if they have any illnesses or parasites. A sick mouse with internal parasites or other diseases could pass those on to your cat. They may also be carriers of bacteria and other illnesses.

3.Can Cats Get Sick From Eating Poisoned Mice?

This is the other health risk of cats eating mice. Just because you don’t leave out any poison or poisoned bait in your yard, that doesn’t mean that your neighbors do the same. A mouse could eat a slow-acting poison next door, come into your yard, and then get attacked by your cat. The poison could then be consumed by your cat. This probably isn’t going to be a large enough dose for serious harm, but they good become unwell. 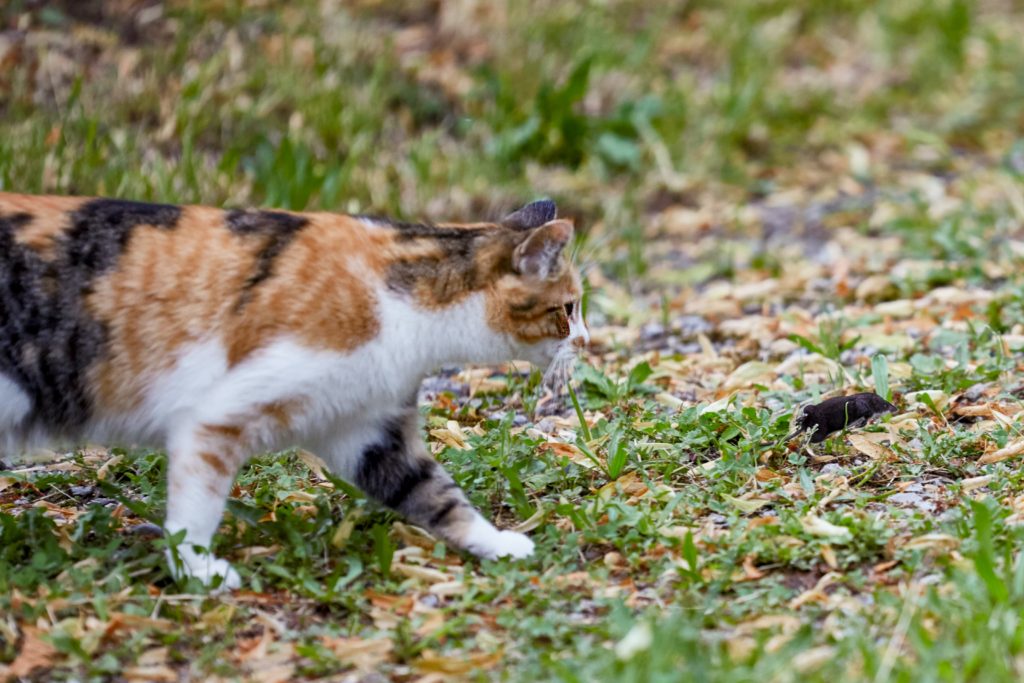 This is a different question. Now we are into the territory of moral dilemmas. There are different opinions on the subject depending on who you talk to. Some cat owners have no problem with their pets killing mice if they see the rodents as vermin. You may feel as though you are helping to control their numbers. But, there are also lots of cat owners that aren’t so happy with this issue. They don’t want any wildlife to suffer.

It is important to remember that cats aren’t natural predators so this isn’t a natural impact on a local population. Instead, they are an introduced predator and, when left unchecked, can have a devastating impact on local bird and small mammal populations.

The best place to start when determining your own views on the subject is to consider how it feels when you find a dead mouse in your home.

These feelings can help you determine what to do next regarding encouraging or discouraging your cat from killing mice.

5.How do I Get my Cat to Stop Eating Mice?

If you do decide to discourage your cat from eating mice, you should try and stop them from catching them altogether. Consider the following points:

Remember that cats bring us mice as gifts in the hope that we will be pleased with their work. If we show a negative reaction to the mouse, refusing to handle it and showing displeasure, it might encourage the cat to try something else. If they start to bring in toys or leaves instead, make a big fuss of how lovely this inanimate object is and how you would love to receive more of them. Cats that get the hint may not see as much purpose in going after mice.

However, there may still be cats that continue to hunt for mice as a way of expressing those instincts and playing. The cat may be bored and in need of some entertainment, which would explain finding the mice uneaten. So, make sure to spend enough time playing with them in the house with appropriate toys. Remember that playing with mouse-shaped toys will give mixed messages.

There is also the risk that your cat wants to eat the mouse for sustenance. A well-fed cat shouldn’t have any inclination to eat the mouse it just killed. But, those that lack adequate food and nutrients may take the opportunity for a good snack. If they eat mice regularly, consider if there are any issues with their diet.

Finally, you can also give mice and other animals a head start by putting a bell on your cat’s collar. Bells are great alarm signals for wild animals that a cat is nearby. They have a better chance of running away in time.

Today we have discussed the eternal topic of the cat and mice battle. It is pretty natural for the cats to play with such easy prey as mice, which actually tends to be their main objective. Cats rarely kill mice just for the sake of eating if they are not hungry. Most of the time they just want to play.