One of the characteristics we love most about our pet dogs is their beautiful, expressive tails. We love to see them wagging at top speeds as our pets greet us at the end of the day, or when they go off exploring a new smell or play with a new toy. But, our dogs’ tails aren’t wagging 24/7. This positive behavioral cue is important as a contrast to the negative cues.

Why do dogs put their tails between their legs? When your dog’s tail is between its legs, it is sure to be a negative reaction to an uncertain or stressful situation. Something is happening that is making them fearful and it is your job to ensure that they feel safe and reassured so they can get that tail wagging again.

There will be times when dogs have their tails between their legs. So, what does this mean?

What Does It Mean When A Dog’s Tail Is Between Its Legs?

The most common reason for a dog’s tail to be between its legs is fear. Dogs will normally carry their tail out behind them and wag them in greeting or as a sign of joy. This is an important social cue with other animals. But, this also means that you have to watch out for the times that the tail drops. A little drop could mean uncertainly. The tail fully between the legs could be a deeper fear. Pay close attention to see what your dog is telling you.

What Is Your Dog’s Tail Telling You?

There are three common reasons for a dog to have their tail between its legs. It is important to not only pay attention to the position of the tail but also to the other body language cue and any vocalizations. Those reasons are:

Now, you might say that these are all very similar reactions and emotions. However, they can be greatly different depending on the situation. An uncertain dog may just need a moment of reassurance when meeting someone they don’t know or seeing an unfamiliar dog. This uncertainty isn’t necessarily stressful, it just makes them hesitant and may have them turning to you for guidance.

Fear is different. Fear is when a dog reacts with a choice of the fight, flight, or freeze. They could be terrified by a scary stimulus and want to remove themselves from the situation or end up lashing out. This massive difference in subsequent behavior is why it is so important to watch the position of the dog’s tail closely. An unsure dog can perk up and be happy in the new situation with a quick word of encouragement and a pet. A scared dog may run or bite if they feel they have no better option and you don’t respond to their cues.

Why Is My Dog’s Tail Tucked Under?

This all comes down to the position of the tail. Some dogs will lower their tail a little into a more submissive pose. This is a great cue for other dogs that they meet to show that they aren’t a threat. You might notice your dog pause when a bigger dog appears on a walk or if they greet a yappy little dog. The tail may drop as they are unsure how to proceed with this more dominant animal. With the right cues from the other dog, and your reassurance, the tail can start wagging and they will sniff a potential new friend.

However, if that tail becomes tucked underneath the body, almost completely out of sight, this is a sure sign that they are stressed out and scared by the situation. Perhaps they didn’t get the right cues from the more dominant dog and are scared to go any closer. Or, you might notice this happen in a stressful situation at home, such as when there are fireworks or thunderstorms. If you see this physical cue, go over to your pet and console them. Do what you can to reassure them and remove the stimulus causing this fearful response.

Why Do They Tuck Their Tails?

There is another practical side to this behavior. Not only does the tail tucking offer a clear visual sign of submission to a more dominant animal, but there is also the chance to tuck the tail out of the way to avoid damage. There is the risk that a rival dog, especially one that is more powerful and aggressive, could bite and tear at the tail, causing irreparable damage.

Why Is my Dog Panting And Has A Tail Between His Legs?

It is also important to remember that panting is another sign of distress in dogs. So, if your dog starts panting with its tail between its legs, there could be a big anxiety issue going on. Dogs that are uneasy or unsure about a situation aren’t so likely to pant too, and may just lower their tail or show other cues mentioned below. Dogs that pant may fear for their lives and need greater help. Panting can also be a sign of illness and reactions to medication. If this all comes on with no clear reason for the dog to be scared, take them to see the vet. 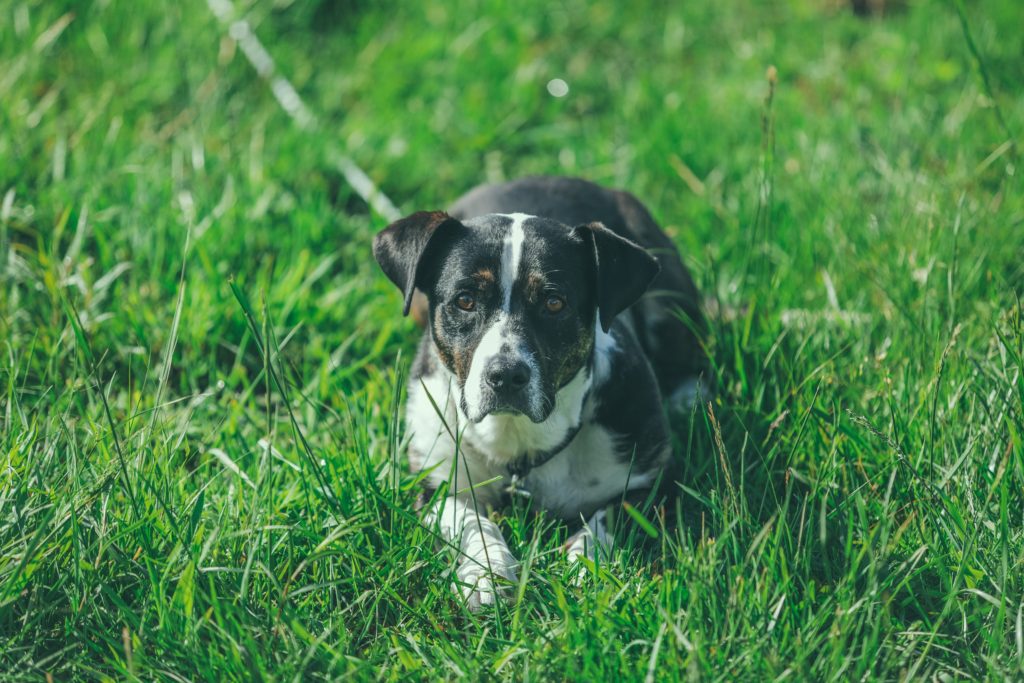 Why Does My Dog Put His Tail Between His Legs When He Eats?

If you notice your dog with its tail between its legs when eating, be aware that there may be something going on where they are fearful. This could be fear that their food will be taken away from them, or that they may not get another good meal for a while. Food insecurity can stem from times of trauma where food was scarce, or from when they had to fight for food with other dogs. Rescue dogs may still have this fear for a while, taking time to learn that the food in the bowl is all theirs and that there will be more to come.

With that said, there are cases where dogs will eat with their tails tucked even if there is nothing wrong. Some dogs will let their tails drop down between their legs when they are concentrating on something. So, dogs that get super-focused on their food may do the same.

Why Is My Dog’s Tail Down All Of A Sudden?

It is important to keep an eye on your dog’s tail because it can tell you so much about their physical and mental health. In many of these cases, you will find that once the dog is more comfortable, the tail will rise again and they will start to wag it when content. But, there are times when it seems like the tail just drops out of nowhere and remains in this position, even if the dog is otherwise happy and comfortable. There is a risk here that your dog is dealing with an illness. That is why you should also look out for the following issues:

Another interesting reason for dogs keeping their tails between their legs is that bitches do this when in heat. This can feel like a sudden change where they don’t raise their tail too much. This is a way of protecting themselves from unwanted male attention. Then, there is also the risk that this could be the result of a condition called the limber tail.

What Is A Limber Tail?

Limber tail is also acute caudal myopathy. This condition often occurs after periods of activity of stress to the tail where the base of the tail becomes inflamed. The dog can’t hold it up in a normal position and it will sag limply until the condition gets better. This should ease with time and plenty of rest. But, you can always talk to your vet to make sure that there is no underlying problem or damage to the tail.

What Other Body Language Cues Should You Look For?

Other signs of fear and distress in dogs can include the following:

It is important to keep these signals in mind, especially if you have a breed of dog with a different tail than the standard long tail that sticks straight out. A curled-over tail can’t go between the tail, and nor can a docked tail. But, the dog can still lower their ears and show other signs.

Most of the time dogs put their tail between their legs because they are afraid of something. Go to your dog to show that you are there with them, understand the stimulus causing the fearful reaction, and then do your best to either remove it or remove your dog from the situation. Finally, take your time to get to know your dog’s range of behavioral cues so you can communicate more easily in the future.