You will often notice your cats giving each other a little greeting with their noses when they interact with each other. There are some owners that will call this a “kiss”, but is this putting too much of our own ideas of affection on the cats? What is really going on with these nose bumps? Also, what does it mean when they start doing the same to us?

How Cats Communicate and Show Affection with their Nose

The term “nose bump” may be a better one than a kiss. This common social behavior isn’t unlike us giving friends a fist bump as a sign of recognition or affection. It is a simple “hi, how are you doing” that reaffirms social bonds. With cats, this can go further with scent marking and identification because cats have scent glands on their cheeks and a keen sense of smell. If your cat then gives you a similar nose bump, you can feel grateful to be considered in the same regard in their social circle. It might mean little more than “hi human, good to see you”, but this is still a big deal when building a bond with a cat.

Before we look at how cats use their noses to communicate and show affection, let’s find out more about this interesting piece of anatomy.

10 Interesting Facts About a Cat’s Nose:

1) Do cats have noses or snouts? They are box-snouts rather than noses as we know them. It is a simple flat structure with two nostrils.

2) What are cat noses called? We do tend to call them noses because the term snout has different connotations. But, the snout is more accurate. You may also hear people talking about nose leather for the bare patch around the nostrils.

3) Do cats have nose hair? The cat’s nose is hairless around the nostrils. This allows for a more sensitive “nose leather” and a better cooling process.

4) Do cats have boogers? A cat can produce mucus in its nose to handle particles and allergens, much like we do. If they start to develop thicker boogers with noticeable color or any other sort of discharge, there may be an illness or infection present.

5) Is a cat’s nose sensitive? Your cat’s nose is sensitive, with nerve endings that help with communication and touch. They are also one of the few places on the body sensitive to temperature. When you add the whiskers, this area is essential for gathering important information.

6) Why do cats lick their noses? It is important that a cat’s nose stays nice and moist which helps to keep it cool. Licking the nose make it easier to achieve this, while also keeping the nose clean.

7) Why do cats have wet noses? These wet noses play an important role in keeping cats cool.

8) Do cats have nose prints? Remarkably, yes. Each cat nose does have a series of ridges that is a lot like the human fingerprint. As a result, you will get a unique pattern. There are suggestions that the sensitivity of a cat’s nose means that they can use this for identification. But, the extent of this is unclear.

9) Can cats sense sadness? Yes. There is growing evidence that cats are a lot more empathic than we might have suspected. We often think of dogs as being the emotional pets that can always tell when we are feeling down. But, it seems that cats are just as intuitive to their owner’s feelings.

10) Do cats give kisses with their nose? It all depends on your definition of the word kiss. There are different ways that cats show affection, which are discussed below.

As you can see, this is a very sensitive and important part of the cat’s body that makes a big difference in how they perceive the world. Therefore, it makes sense that it would also be such an important tool for expressing emotion and communication.

What Does it Mean When Cats Put Their Noses Together?

Cats put their noses together when greeting each other as a sign of recognition and a way to reaffirm social bonds. It is a way of saying hello and seeing who their friend or relative is without relying too much on verbal communication or sight. Your cat’s sense of smell is one of its most important tools. They also have scent glands on their checks to pass scent along, which is why cheek running is commonly seen alongside nose rubbing.

What Does it Mean When Your Cat Gives You Kisses?

Nose touching isn’t just something seen between cats and other cats. Many pet cats will also come over and provide similar levels of affection with you, using many of the same forms of communication. After all, the cat sees you as equal to the other cats that they share their life with and that you are all part of the same happy family.

When we use the word “kiss”, however, we have to consider exactly what the cat is doing at that moment. Different behaviors can mean different things. There are those moments where they will come and boop you on the nose for a moment or rub up against your cheek. These can be fleeting moments of affection. Then there are the times when they stop and lick your nose. 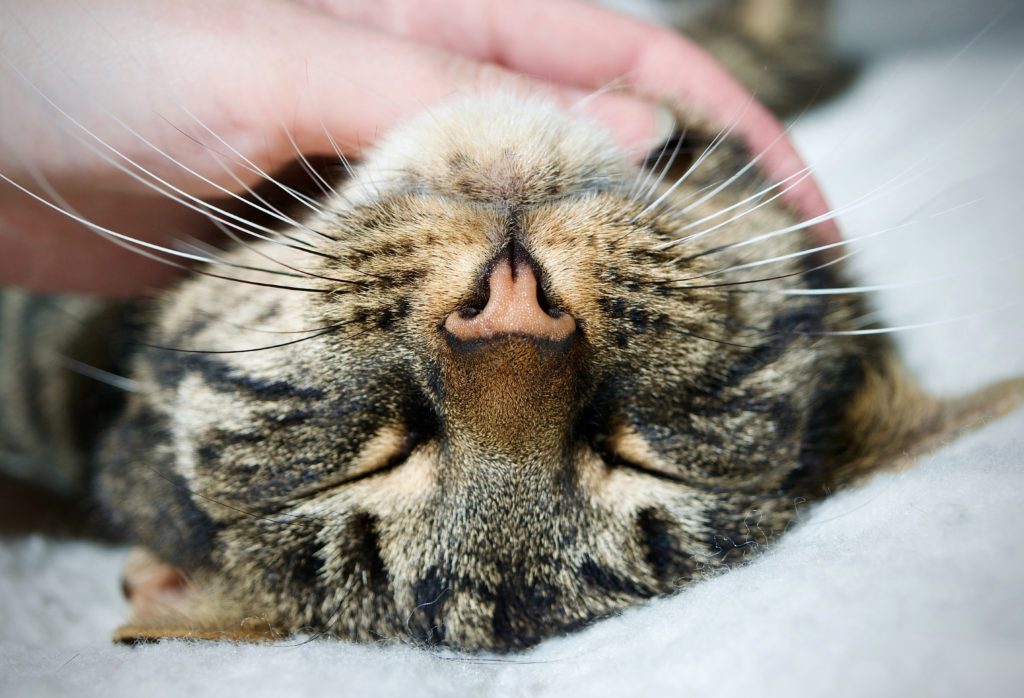 What Does it Mean When a Cat Touches Your Nose With its Nose?

A nose-to-nose touch is much the same as that between cats. It is a simple moment of greeting and affection that you might get between friends. Consider the way that you greet your own friends when you see them. You may have specific actions that you are careful to repeat each time to help express your affection and subconsciously strengthen your bond. You may fist bump a friend as a quick gesture. It says a lot in one motion without us really thinking about it. The nose bump is very similar. Or, you may go in for a quick one-armed hug for a moment of physical contact – a bit like the cats rubbing cheeks.

Your cat is doing the same thing with you. It isn’t the most overly-affectionate expression of affection but it is still an important way to communicate their feelings. It is a quick hello and a way to say that they appreciate your presence at that moment.

What Does it Mean When a Cat Kisses Your Nose?

Then there are the times when cats stick around and lick your nose or your face for a little while. This licking can be a sign of greater affection and gratitude. It also shows a much stronger bond between the two of you. The reason for this is that licking occurs between family members, particularly between mothers and kittens. The licking is a way to build bonds and show feelings of trust or protection, depending on the relationship.

Therefore, when your cat comes up and licks you on the nose, you can be sure that they are content at that moment. They feel secure in your company and are happy to stay with you, and this is the best way for them to communicate that to you. Alternatively, it could be a sign of protection and care, showing that they are there for you. This goes back to the idea that cats can detect human emotions like sadness. They may be trying to show comfort when you are having a bad day.

What Does it Mean When Your Cat Wants to Lick You?

You may have also noticed that your cat doesn’t just lick you on the nose, or that they are keen to lick you whether they get the chance. This is more common with kittens as they build their bond with you and show gratitude. There may also be a compulsion to groom you by licking your hands.

Just watch out that the licking doesn’t become too obsessive. There is the risk that some cats will turn to licking out of stress or anxiety. Stress licking can also cause cats to lick themselves too much, so watch out for any bald patches. Or, you may simply have allowed the behavior for so long that they don’t see the harm and it gets annoying.

If licking becomes too much, you can try and discourage it by distracting them with something else. Move them away from your arm and give them a toy to play with instead of comforting them. You can still show your affection and prove that you are still there for them without the need for so much licking.

In short, these nose bumps are very important for maintaining social connections and getting information about cats that they meet. While it isn’t quite as loving and affectionate as the “kiss” we mistake it for, it still has an important role in social bonds. This is the best way for cats to show that they are comfortable with you and happy to see you. It is instinctual for them to want to bump your nose or rub against your face. Appreciate it when it happens and reciprocate to strengthen that bond.