Pit bulls have an impression of being aggressive dog breeds as they have made fatal attacks on humans. If a Pitbull bites you, the situation can become difficult to handle as it isn’t easy to release their bite.

So, how do you get a Pitbull to release its bite? The best way is to grab the Pitbull by its tail and pull it backwards. If the Pitbull is biting you, you can move your hand or leg inside the dog’s mouth instead of pulling it out. You can also twist the dog’s collar or use a break stick. It will help unlock the dog’s jaw and release the bite.

Now, let’s get to know more about a Pit bull’s bite and how you can tackle the situation. Check out the list of the most effective dog repellent sprays on Amazon now!

Do Pit Bulls Lock Their Jaws When They Bite?

Pit bulls or other dogs cannot lock their jaws, nor do they have any such mechanism. However, Pit bulls are trained to grip to the bite and not release it. So, the way the Pit bulls grab their target and don’t leave it, no matter how hard you try, is called locking the jaw.

Also, Pit bulls have powerful teeth and strong jaws. Instead of releasing the bite and gripping it again, they grab it on the first try. They then try to grip even harder by locking their jaws in a specific position, which makes it difficult to release the bite.

What Makes A Pit Bull Attack?

Although Pitbulls are known for their aggressive nature and large jaws, they don’t attack humans and other animals without reason.

So, here will discuss the most common reasons why Pitbulls attack.

One of the most common reasons for a Pit bulls’ attack is that they feel threatened or afraid, may it be the owner, other people or animals.

However, the cause of being afraid often hints back to the dog’s grooming. If the owner punishes the dog too often or the dog has faced abuse in the past, it will naturally develop a defensive instinct.

Such Pit bulls can get afraid easily, and they will bite you as soon as they notice a slight threat.

Pit bulls won’t become aggressive until you do something that could put them in such a situation.

Pitbulls are naturally aggressive, and slightly teasing the dog or touching them, again and again, might awaken their aggressive instincts. That is the most common reason why Pitbulls bite children. As children don’t know the dog’s behavior, they might tease it for fun.

Also, some Pit bulls become aggressive when it comes to food. If they don’t get food on time or someone disturbs them while eating, they might also bite.

As Pitbulls think of themselves as superior, they might not blend well with an owner that feels the same.

So, when owners or other people try to interfere in their things, they might become aggressive. The aggressive behavior starts, especially when strangers come into their territory. Like other dogs, Pit bulls are also territorial, and they want to protect the things that are special to them.

4. They are sick or in pain

Like other dogs, Pitbulls may also show a changed behavior when sick or in pain. So, it’s better not to disturb them but take care of them by ensuring regular visits to the vet.

Related Post: Can You Use Pepper Spray On Dogs?(It Depends)

How Do You Get A Pitbull To Release Its Bite?

Here are some tips that can help you get a Pitbull to release its bite. 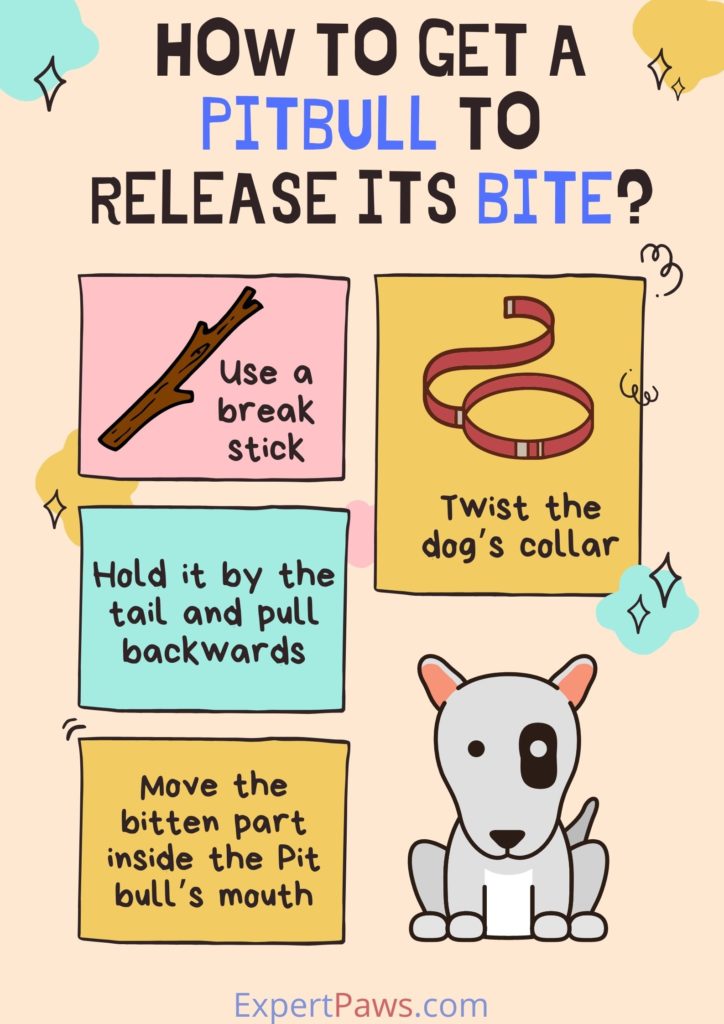 1. Hold it by the tail and pull backwards

Holding the Pitbull by the tail and pulling it is the most effective method. When you see a Pitbull biting another dog or a human, grab its tail and take them higher in the air. This technique will make most Pitbulls release their bite.

But, it’s also a better idea to slowly take the Pitbull backwards by the tail. It will prevent the dog from turning towards you and biting.

2. Use a break stick

A break stick is a plastic tool that you can use to release the bite of a Pitbull. When you put it in the Pitbull’s mouth and twist the stick, it will help unlock the jaws. Break sticks are useful for Pit bulls, but you should avoid using them on other dog breeds.

3. Move the bitten part inside the Pit bull’s mouth

If a Pitbull bites your arm or leg and no one’s around to help you release the bite, you’ll have to figure something out yourself.

In this case, a better idea is to move your arm inside the dog’s mouth. If you try to pull out the arm, it may tear the muscles and cause severe bleeding. Instead, moving the arm in different directions will help loosen the dog’s grip, eventually making it release the bite.

Twisting the Pit bull’s collar might also come in handy in some situations. By gripping the collar firmly, you can stop the air supply to the Pit bull’s lungs, which will make it leave the bite. Once the dog releases the bite, make sure to leave the collar as well. Check out the list of the most effective dog repellent sprays on Amazon now!

How To Prevent Pitbull’s Attacks?

As dogs never bite without any reason, you can prevent Pit bull’s attacks by following our tips.

Pitbulls are friendly and affectionate dogs, but they can turn into fierce growling creatures in no time. So, it’s better to prepare yourself for a Pit bull’s attacks and stay prepared ahead of time.

But, always remember that Pit bulls never bite without reason. If you poke them or try to come into their territory, they will definitely feel a threat. In such cases, you should know how to get a Pitbull to release its bite.